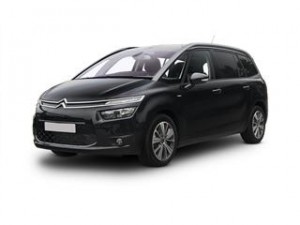 Seeking a larger MPV than the Citroen C4 Grand Picasso with its 7 seats is the answer. Inside are 7 well-placed seats with clever engineering to maximise space and offer flexible practicality. Outside the style is of a more futuristic nature with sleek space like lines. The ride is smooth and effortless and feels lighter than it should be. The dashboard makes you feel in control with excellent layouts of all controls.

The first generation Grand C4 Picasso, a seven-seater, was launched in November 2006 and produced until March 2013, when the second generation took over. The vehicle shares the same platform and range of engines as the Citroen C4 and Peugeot 307. The car was officially revealed in the Paris Motor Show on 30 September 2006.

The Grand C4 Picasso boasts the longest wheelbase in its class, ensuring plenty of room for all 7 occupants. There are 645 litres of boot space ready for anything be it the shopping or weeks away. Safety as with all people carriers should be paramount and this car has achieved a 5-star rating for safety.

The petrol engine is 1.6 however the diesel versions are the ones to go for offering up to 74mpg. There is a 2-litre diesel which is the quickest however fuel return is not as impressive.

Space generous Citroen Grand C4 Picasso is widely regarded as being value for money however further savings could be had. The experienced deal experts at Coast2Coast Cars have years of experience in finding great offers on the exact spec and model of the car you enter into our online form, it’s that simple. Spending 2 minutes now filling in our quote form could save you thousands. What’s more, we can even help with finance too as we work directly with Citroen dealers. We are free and you don’t even have to take up the deal offered once we have found your exact car match. Finance is subject to status.